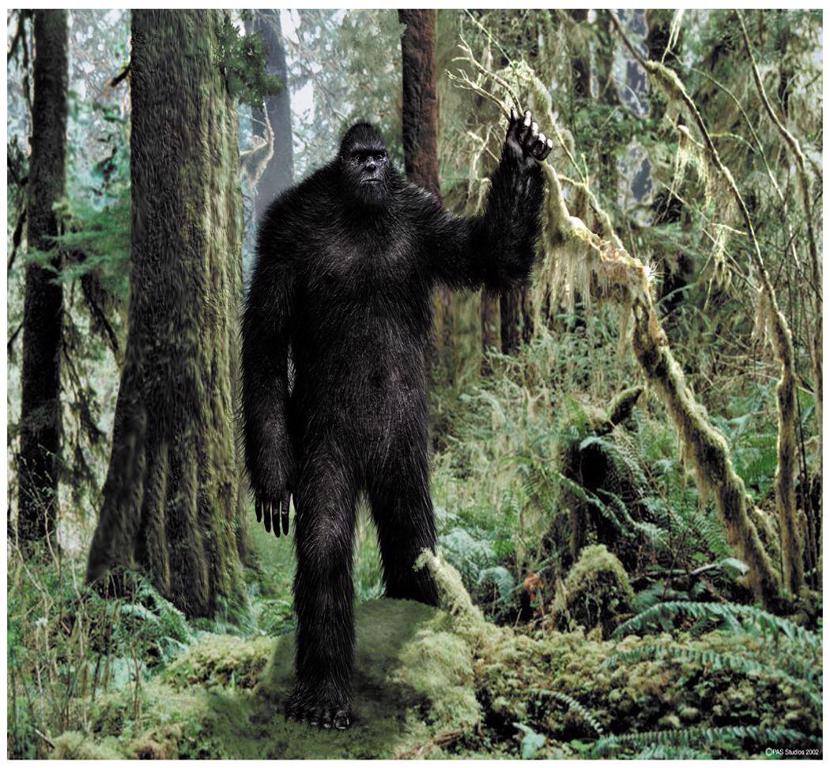 There was a time when Bigfoot sightings were just some common news for people in North America, but now they wonder what happened. Was it all real, or is the technology today preventing pranksters from faking it?

All new Ford Electric Mustang is coming out with five…

These Surreal Self Portraits By 26-Year Old Artist Will Blow…

If you use the internet, you probably have heard of Bigfoot. Having a bunch of other names, too, like Sasquatch, Yeren, Yowie and Yeti, Bigfoot is a tall part-human, part-chimpanzee, part-bear organism that roams tall forests. Most of the bigfoot sightings have been from North America, and many people including a handful of scientists have strong beliefs in the existence of the mighty creature.

Bigfoot sightings over the years

While legends have existed since, probable, centuries, the existence of Bigfoot became a better known phenomenon in 1958, when Humbolt Times, from the US, published an article in its history section, titled “Giant footprints puzzle residents along Trinity River”. Written by Andrew Genzoli, the article talked about Jerry Crew and his fellow road constructors finding large footprints on the ground. The article was published with a large photograph of Jerry holding a cast that he made from the original footprint. This cast was 18 inches long and 7 inches wide; it was also presented in the newsroom as evidence of the legitimacy of the article.

Some of the excerpts that the article reads are

“Bigfoot: The Life and Times of a Legend”, a book written by Joshua Blu Buhs, mentions that Genzoli despite using the term “BigFoot”, which is easier to spread as it is easier to become a word of mouth, wasn’t expecting his story to get hit this strong, as he only published it thinking it was just a random Sunday morning story.

This article caught some major attention leading to a bunch of follow-ups including from a journalist Betty Allen who also worked at the Humboldt Times who talked about more details of the creature and the people who discovered the footprints.

Now, however, the Bigfoot stuff is all over the internet, and occasionally makes it way to the news, too.

Google the word “Bigfoot” or another one of the human-animal’s names or look it up on YouTube and you’ll find loads of people claiming to see one or having posted a video or photo of one. As the number of claimed bigfoot sightings increase, the number of pranksters trying to get fame, views or laughs out of it increase, too. Normally, they do so by wearing Bigfoot costumes or editing their photos or videos.

Arguably, the most famous and the most widely believed, as true, of the bigfoot sightings videos is the Patterson-Gimlin film from 1967. Shot by Bob Gimlin and his friend, Roger Patterson, off the banks of Bluff Creek in Northern California, this video is about the two cowboys riding their horses when one of the horses suddenly started going crazy.  According to Gimlin, the incident went forward as this. “The leaves were all changing, reds and yellows. We were just riding up there, Roger was taking pictures of me on the horse and leading the packhorse. That’s when Roger’s horse just started jumpin’ and a lungin’.” This made Gimlin look towards what was making the horses go all spooked out, and much to his surprise, it was a whole Sasquatch right in front of him, walking tall only a few yards from him.  Bob says, “There was a Bigfoot standing there just on the other side of the crick from us. But it just immediately turned and started walking away. Well, Roger by then had got his camera out of his saddlebag on his horse, and he was up and running across the crick there. He hit the other side of the bank and stumbled and kind of fell down on his elbows. And that’s when it made that famous head turn, as I stepped down off the horse.” This “Head turn” got super famous, and become the title for quite a few news reports about bigfoot.

Here’s the claimed original and complete reel of the video

The “Head turn” zoomed in and edited

“I think i saw a skunk ape – please help”

Here’s another fairly convincing video of Bigfoot filmed by a guy named Josh Highcliff, who, in 2013, posted the video on YouTube not sure what the creature was, and then having hundreds of people tell him that it’s a Bigfoot. Josh said that he didn’t want to mention the location on the internet as that would result in strangers barging in on his property, which he obviously didn’t want, and also, because it might possibly result in people trying to kill the creature.

From October, 2012, this video was shot by friends/siblings who went hiking at the Provo Canyon in Utah and stopped to shoot (with a camera) a ‘bear’. It didn’t took minutes until the ‘bear’ stood up to look at them, which obviously made them lose all their calm realizing it wasn’t a bear but something else, that noticed them. The group panicked and ran, for their lives, towards their car leaving all the belongings behind.

People have been “discovering” Bigfoot footprints for a very long time. Some of these have been photographed and some have been produced casts of. Many of these casts have been, however, proved to be fake.

The most famous one came from Ray Wallace. In 1958, Ray L. Wallace set the world talking about Bigfoot when large footprints were found outside his logging camp in Northern California. — After his death, however, his kids revealed that all their father did was to pull a prank on the Bigfoot sightings’ enthusiasts by using carved wooden foot stamps to stomp down a track. They said that it wasn’t something that he well thought of or planned and the joke only caught up attention by itself thanks to the believers, and went viral.

This photo was taken by the explorer Eric Earle Shipton in the Himalayas in 1951, he claimed that it belonged to a Himalayan Yeti. The photo was sold by an Auction House for $5,000.

There are some websites who sell Bigfoot footprints’ casts, too. Check out Gooze&co and Skulls Unlimited

Bigfoot sightings investigated by the FBI

On June 5, 2019, the FBI tweeted about an update to their publicly available FBI Vault documents and shared the link to their vault website. The link lead to the FBI’s documents on the Bigfoot.

While the FBI having a file on Bigfoot was hilarious for most people, the believers thought they won, as Bigfoot had to exist for even the FBI to be working on it!

Moving on to the file, the file is old – very old- comes from the 1970s, and is a documentation of the bunch of letters that were exchanged, over the course of several months, in between the FBI and a local man. The story began as Peter Bryne, who was the then Director of the Bigfoot Information Center and Exhibition in The Dalles, Oregon, sent a letter to the FBI requesting them for information on BigFoot, in case the FBI ever researched on the topic; the man asked if the FBI had ever received any “Bigfoot hair” for analysis, and the analysis, if performed, yielded what results? Bryne also requested FBI to run an identification test on a hair sample while informing them of the importance this hair sample held for his institute. 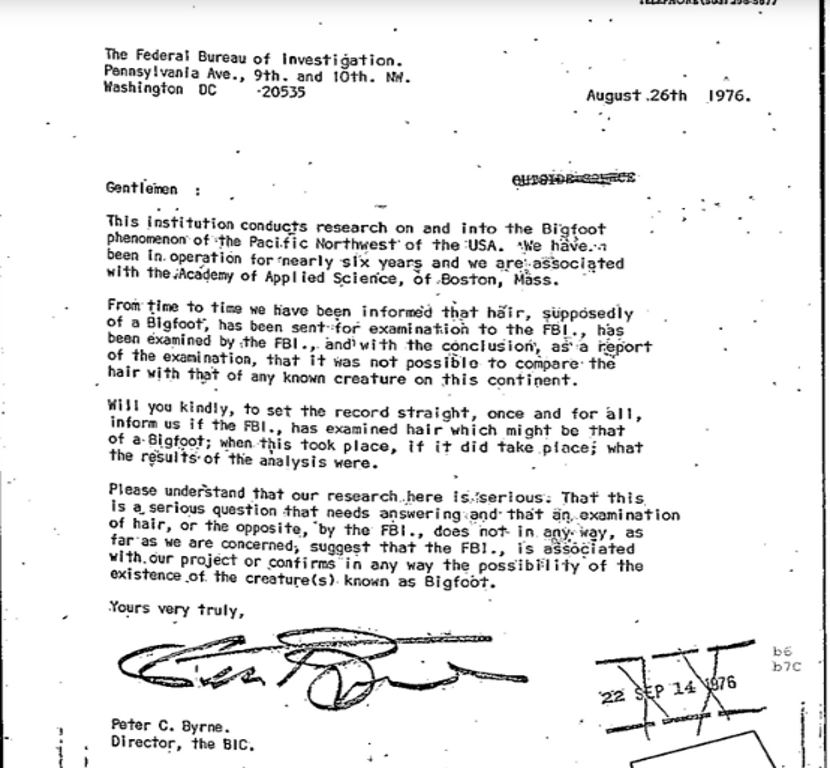 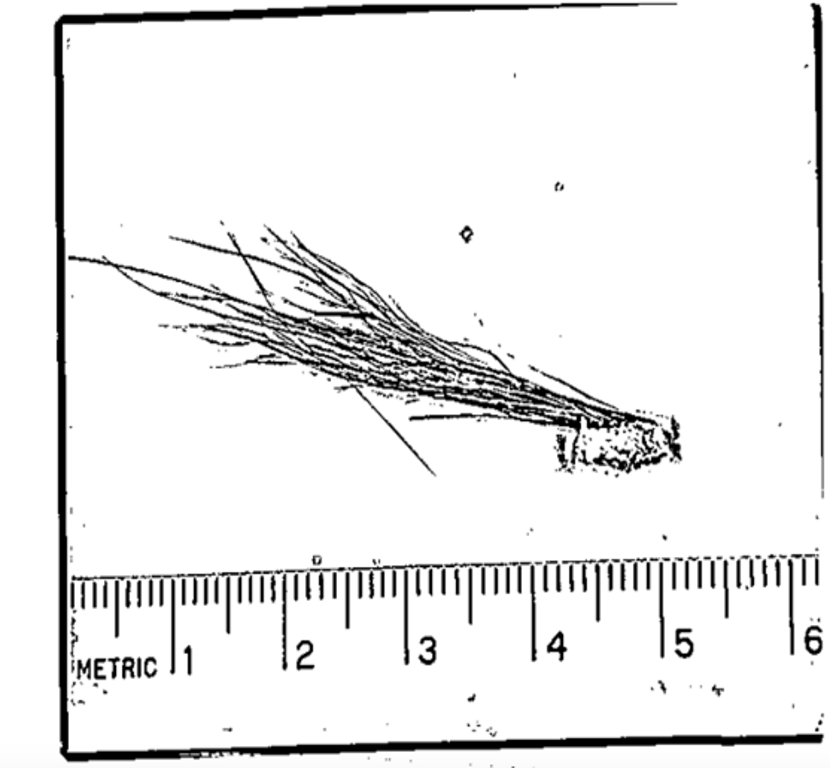 To this letter, the FBI responded by telling the Director that something like this hadn’t ever been done by the FBI in the past and that while the FBI’s job was to conduct examinations for law enforcement agencies for crime investigations, they would, still, sometimes make exceptions for science and research and since this was a similar case, they agreed to analyze the sample Byrne was to send. 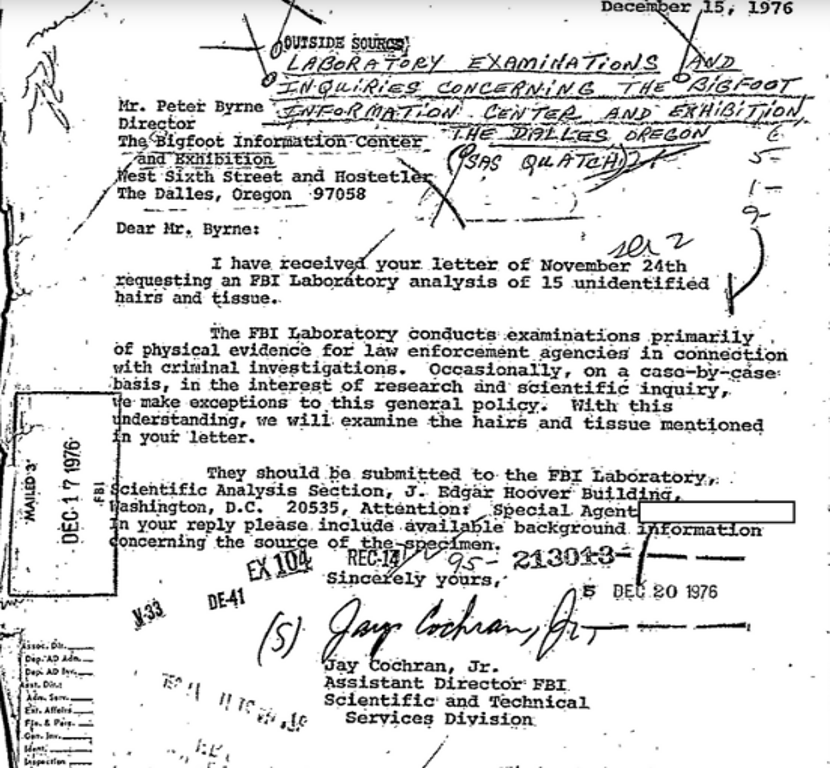 While the story does escalate here, it doesn’t escalate well; on March 1, 1977, we get the final letter which was sent from the Academy of Applied Science, Massachusetts, the location of the sample analysis, to the FBI’s Scientific and Technical Services Division. This letter was sent after the analysis of the hair sample and read that the sample belonged to a deer family. 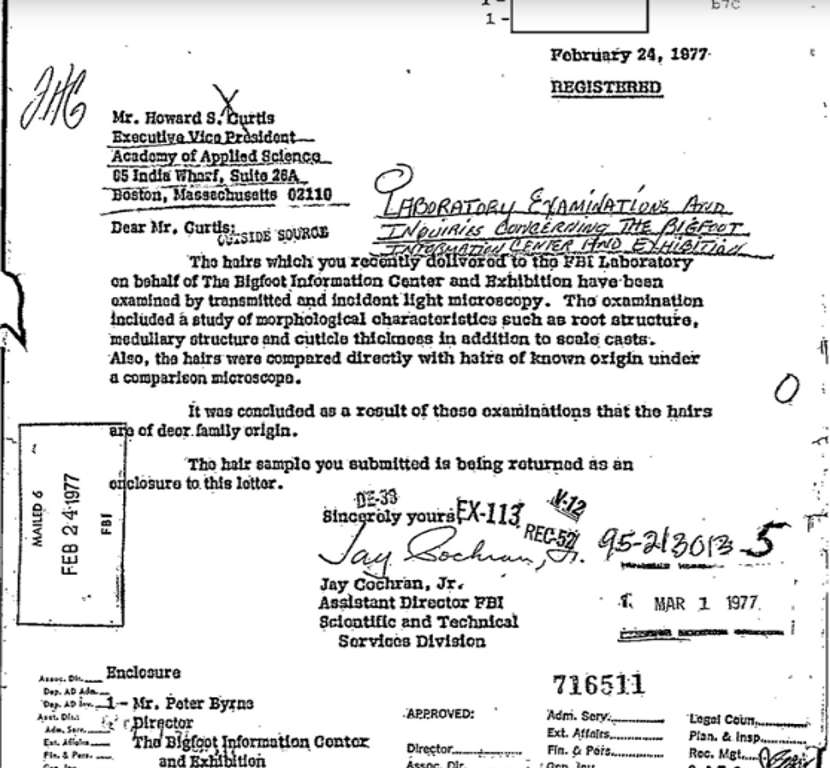 While this might get some people joyed over the semi-potential existence of Bigfoot, this file in itself does not mean anything. It is neither a proof or a “half-proof” of Bigfoot’s existence, nor does it say anything about the FBI’s belief on Bigfoot.

But the conspiracy theorists think that the FBI still wants to hide something and only declassified this to get people’s mind off Bigfoot.

The researcher who dedicated his whole life to Bigfoot sightings

One of the people with the strongest belief in Bigfoot was Dr. Grover Sanders Krantz.  Krantz was an anthropologist, who used to teach physical anthropology, as a professor, at the Washington State University. He studied hominid evolution and staunchly believed that Bigfoot roamed the world’s forests.  He was known to be the only academic who publicly expressed this belief of his, despite the fact that it raised skeptics against him, and greatly affected his reputation in the scientific community. “I think a lot of his colleagues kind of rolled their eyes at him and he was the butt of jokes,” says Laura Krantz, who is a journalist and also a distant relative of the scientist and is documenting his life in the serial podcast called “Wild Thing”, “Even now in anthropology circles, there are still wisecracks made about Grover Krantz.” 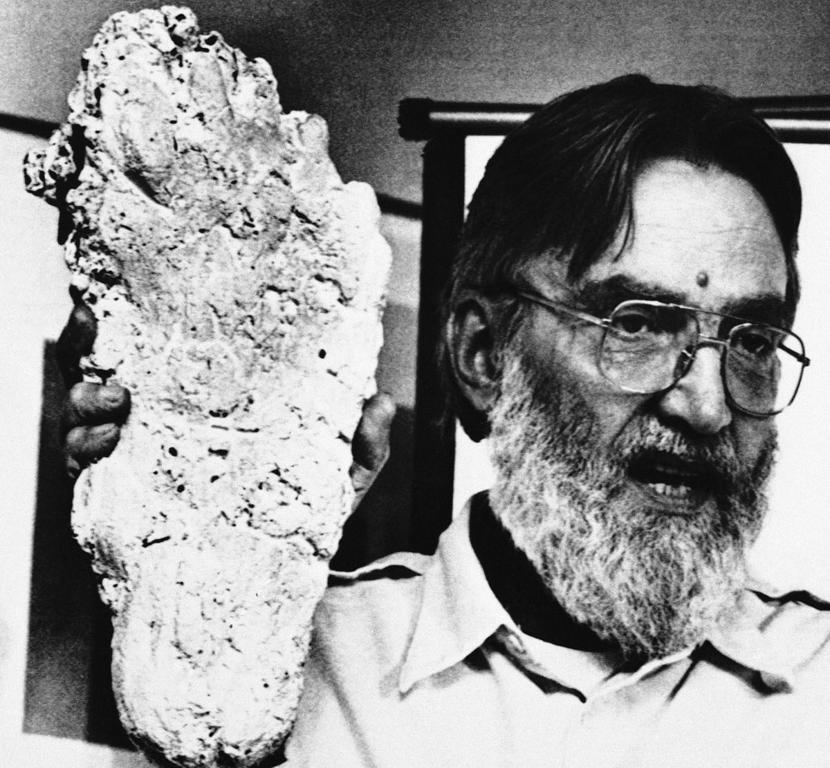 Grover was famous for spending lots of time in the Pacific Northwest forests waiting for Bigfoot to make an appearance so he could shoot it and take it back as a proof. Referring to the scientific community as “they” he once said, “They’re taking a legitimate, skeptical attitude. They want to see the definitive proof of a body or a piece of one.” The biggest factor that gave some life to Grover’s ideas was his strong background in and grasp of primate history and evolution. “Bigfoot is a large, massive, hairy, bipedal, higher primate. You could describe it as a gigantic man covered with hair and being rather stupid, or an oversized, upright walking gorilla,” he once said during an interview. His hunt for clues about Bigfoot was super passionate, and he was very serious about Bigfoot sightings. He would run and collect whatever he could, including foot casts and people’s statements, whenever he heard of Bigfoot sightings. Grover was known to “guarantee” the existence of Bigfoot whenever he got questioned about it. He claimed that the creature was a descendant of ancient Asian apes, Gigantopithecus, that lived around a million years in history. 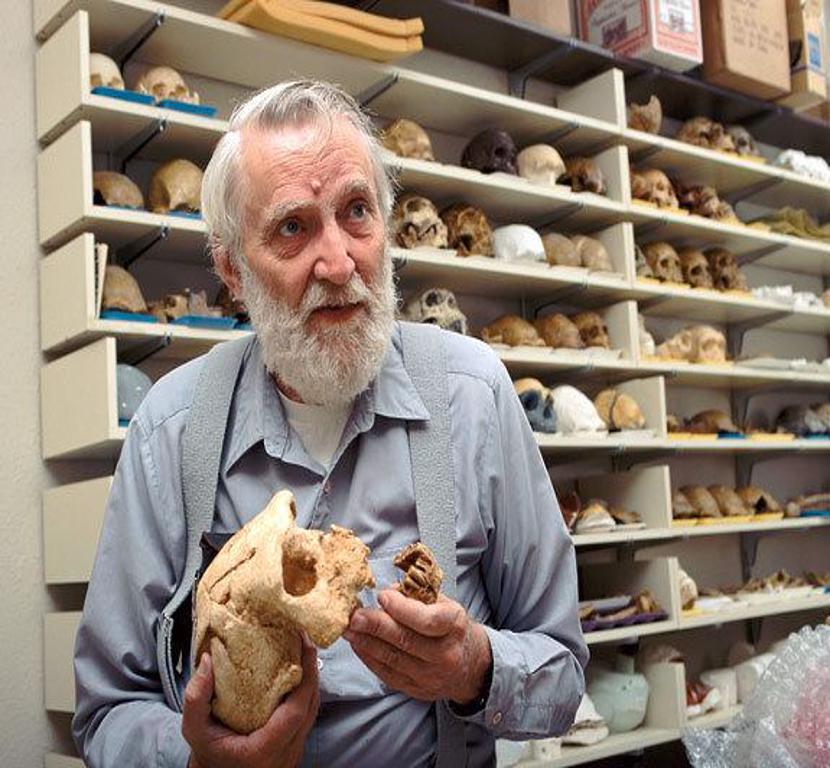 Grover Krantz died in 2002, and his great work as a scientist and a teacher led him to have his and his dog’s skeletons displayed at the Smithsonian’s National Museum of Natural History.

In conclusion, we still have no confirmed proof of Bigfoot’s existence, inexistence or extinction; and none of these Bigfoot sightings have been proved to not have a way to fake them. So, let’s just wait for the discovery of a body, or a Bigfoot making an appearance in a city, just like in the movies!